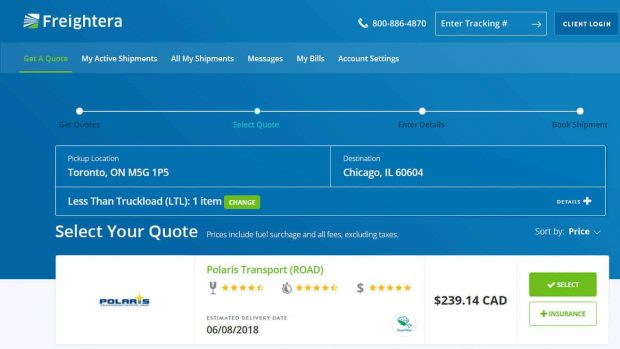 CEO Eric Beckwitt confirmed to FreightWaves on August 1 that his Vancouver-based firm is seeking a listing on the TSX Venture Exchange through a process similar to an initial public offering.

“Our intention to be a publicly listed company,”  Beckwitt said.

Freightera is utilizing a Canadian process known as a qualifying transaction, which allows a private firm to merge with a publicly-traded holding company.

Beckwitt said he could not disclose details or a timetable pending regulatory approval. However, public disclosure by OV2 Investment on June 30, the company Freightera is merging with, valued the company at C$34 million.

“It is conservative,” Beckwitt said. “We’ll see what the market does.”

“We’re very unique in the way we operate,” Beckwitt said.

By going public, Freightera would likely have access to additional capital to expand and better compete with the likes of Convoy, Transfix, and Uber Freight – if it launches in Canada.

The freight-matching platform serves customers in Canada and the U.S. It has more than 10,000 shippers and around 800 carriers.

“We’re one of the top five platforms in North America in the automated freight space,” Beckwitt said.