What Is The Difference Between Passenger Trains and Freight Trains

The differences between transport and freight trains are numerous, ranging from technical to operational. In this article, we’ll take a deeper dive into the main differences and what trains, in the day when electric cars are all the buzz (pardon the pun), have to offer.

So let’s dive right in.

First off: We all know to one extent or another what passenger trains are. But what are freight trains? They are trains specifically designed to be able to haul the maximum possible amount of cargo (freight).

If we want to be really nerdy about it, we can define a train (as a general term) as one or more railway vehicles capable of movement. This movement is fixed (by the railway) and it’s usually powered by one or more locomotives. There are usually several unpowered vehicles (cars/wagons) attached to the locomotives in a fixed formation.

Now let’s get into it less succinctly. 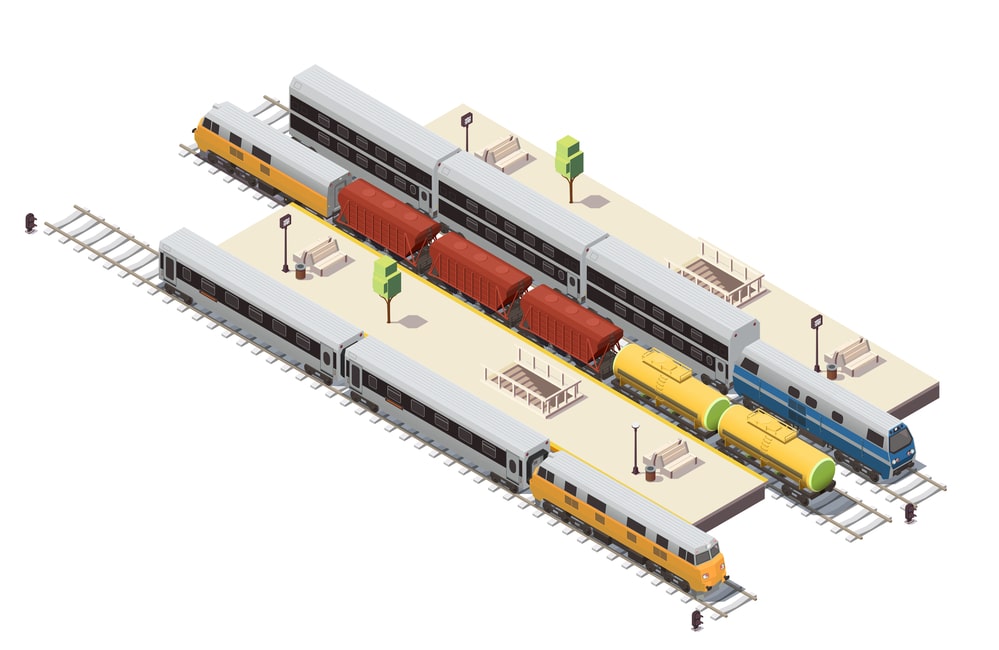 The obvious difference is that one is built for hauling heavy cargo while the other is designed to transport people. That means that, as we mentioned before, passenger trains will usually be powered by one locomotive while freight trains can be powered by as many as four.

Along with the obvious visual aspect, the differences don’t stop there.

If you need an example, just think of trying to stop an NFL quarterback compared to stopping a toddler on a bike, or even one without a bike.

Another reason why freight trains are slower is that they are limited by the slowest car in the line. If one wagon can only move at 40 miles per hour, then the whole train will have to honor that speed limit. These speed limits exist for specific commodities in part due to slack action. If a commodity is fragile or dangerous, then due to the free space between wagons (slack-action) it will experience the full effects of inertia, and at the enormous weights that freight trains haul that can be quite severe.

Next, freight trains are longer and they can often have multiple, electrically powered units that actually power and move the train itself. Instead of one locomotive pulling the entire set of wagons, several can do it much more efficiently working in tandem. Compared to that, passenger trains are much lighter and have more horsepower per tonne, which is relatively easy given that they weigh much less.

On top of that, just like truck trailers, train wagons can differ based on the number of axles they have and the amount of weight they can accommodate. 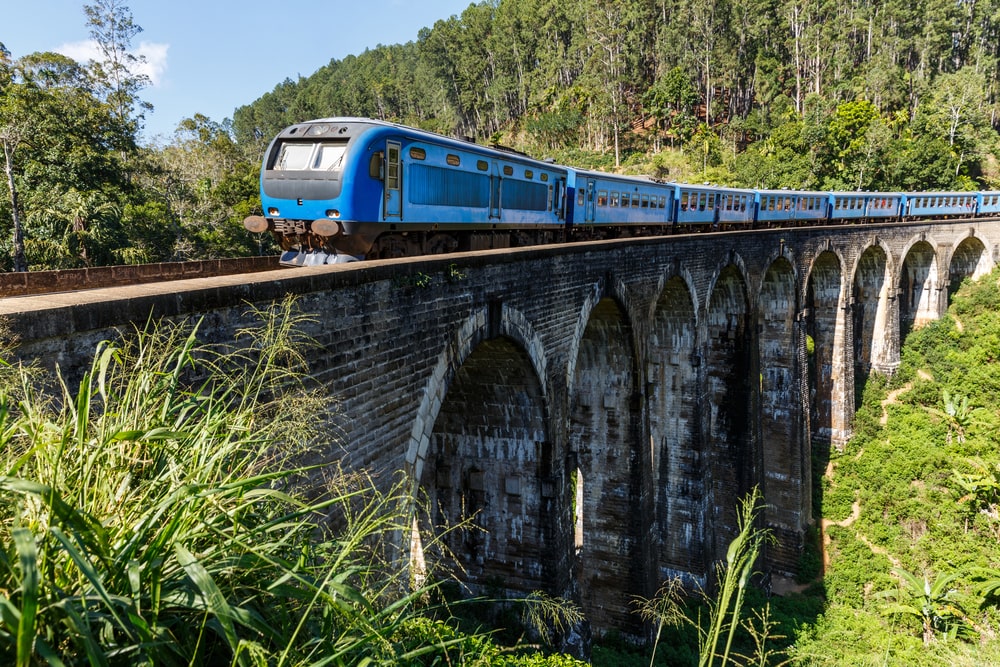 We won’t be focusing too much on the travel side of transportation by train since we are a freight blog after all. That’s why we’ve found a good source of information on that topic in particular in case you’re more interested in that aspect.

We will, however, focus on the differences in operations and procedures when transporting people vs freight.

But in order to outline the differences, let’s first outline the similarities. For one, both types of trains use the same railways. It would make little to no sense for private owners (and yes, rails in the USA are mostly privately owned) to build completely different rail networks for passengers and cargo. After all, there does tend to be the most demand for pretty much anything in places where there are people.

As I already mentioned, the railways in the USA are privately owned and the railways expand into Canada and Mexico which makes them a HUGE network, and when it comes to freight, the USA railways are unmatched.

With that being said, the passenger side of rail transportation in North America is lacking.

And that’s no surprise. Only about 5% of rail transportation revenue in the USA and Canada is from commutes. If one of two venues in your organization generates 95% of profits, then you’re going to focus most of your efforts on that part.

This fact does not excuse the delays experienced by train passengers but it does put things into perspective.

To follow this train of thought (pardon the pun, once again), let’s list a few more factors that commuting by train is, at least currently, lacking. Firstly, passenger trains in the USA are slow. Unlike Japan and a few other countries which have trains capable of traveling at 200 miles per hour, the USA has only had one high-speed rail line under construction as of November 2021.

That means that if you’re looking to travel by train in North America, you’re looking at a much longer time spent on the (rail)road. Why spend 12 hours sitting on a train when you can get where you need in 4-5 by car or 1-1.5 by airplane?

Next, American cities are built for cars. If you’re wondering why this matters since trains don’t operate inside cities anyway, I’ll tell you. It’s because cars and road transport aren’t limited to cities alone. Along with excellent railways (for freight), the USA also has highly developed highways which coupled with the fact that city designs themselves are pushing American citizens to buy cars makes it a no-brainer when considering which way to travel.

Back to the actual operational differences between the freight and passenger rail operations.

Humans, unlike cargo, can make their own decisions and handle their own paperwork which makes life much easier for passenger train operators. People can also take care of themselves without having someone safely strap them to their chairs and they can even board and leave the train on their own.

On the other hand, rail yards have to be manned and equipped with serious pieces of machinery for loading and unloading heavy cargo. 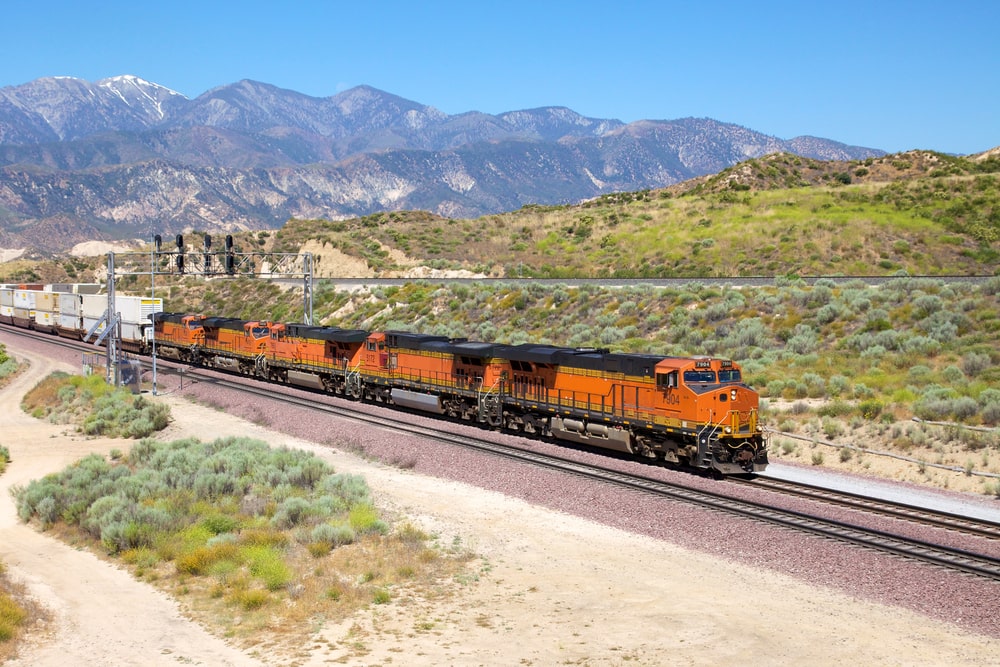 Why Rail Freight Matters Now More Than Ever

Rail freight transport accounts for a third of all intercity freight volume in the USA and yet it accounts for only about 2% of all transportation-related emissions. In fact, a single gallon of diesel fuel is enough for a freight train to transport a ton of freight for 470 miles. As per the Association of American Railroads, freight railroads actually account for only 0.5% of all of the USA’s greenhouse gas emissions.

Freight transportation accounts for roughly 9% of all greenhouse gas emissions worldwide (and about 30% of all transportation-related emissions overall). Luckily, there’s currently quite a bit of push for big corporations to adjust their business practices and reduce their impact on the environment.

The freight industry is following suit, investing in better, more efficient engines and transporting cargo by rail. How? Well, in 2020 the USA railroads consumed 675 MILLION gallons of fuel fewer than they would have had they kept using the same practices from the 2000s. That also means that they emitted 6.7 million tons of carbon monoxide less than their 2000s practices would have led them to emit.

The advantages of using rail freight carriers don’t stop there. Railways are already active so we don’t notice this as much, but using rail freight carriers reduces highway congestion immensely. As per the Texas Transportation Institute, in 2017, highway congestion had a hefty cost on American time and the economy of $166 billion dollars in wasted time and wasted fuel.

A single freight train can replace several HUNDRED freight trucks which frees up valuable space on highways and saves vast amounts of fuel. There’s a bonus. Similar to modern cars, trains have features that allow them to shut off engines instead of idling which is another big plus in terms of fuel efficiency.

If you’re a driver, you’ve likely driven down a road and gotten pretty mad that it’s already bumpy and/or bent. If you’ve ever wondered why that is, it’s in large part because trucks that transport up to 40 thousand pounds of cargo inflict a large amount of wear and tear on the roads which requires them to be maintained and fixed up more often.

We’ve had a lot of experience dealing with rail freight carriers due to the exact reasons listed above. They’re a much greener option compared to trucks and in addition to that (and luckily for our clients), they’re usually the cheapest. Due to their fuel efficiency, carrying capacity, and less manpower required, along with the fact that they’re slower in terms of transit times, rail carriers have the luxury of being cost-effective.

We’ve covered the difference between passenger and freight trains and we can summarize them in one sentence: Passenger trains are shorter, faster and they transport people while freight trains have less horsepower per ton, move heavy cargo, and are incredibly efficient at what they do.

Traveling by train as a passenger may be slow and frustrating, but when it comes to freight, rail transport is unmatched.